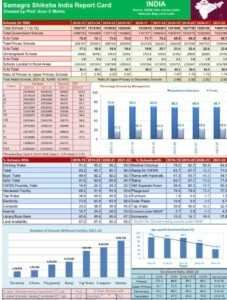 This section presents the Samagra Shiksha India Report Card 2021-22, based on Unified-DISE data downloaded from the official website of the Department of School Education & Literacy of the Ministry of Education, which has been maintaining UDISE from the year 2018-19 onwards. The India Report Cards presents data over a period of time either for the period 2012-13 to 2021-22 or 2018-19 to 2021-22. It offers comprehensive information on all the aspects of school education in India by viewing which the user can judge the status of school education in India: where do we stand?

The previous year District & State Report Cards are available on the official website of UDISE of NIEPA, New Delhi.

India is committed to achieving a 100 percent Gross Enrolment Ratio in school education by the year 2030, which has been envisaged in the National Education Policy 2020 and reaffirmed through the Sustainable Development Goals on education through SDG 4.0.

A cursory look at the India Report Card shows that despite the significant improvement, the goal of universal school education in India is still far distant, and concerted efforts are required to attain the unfinished task. The inconsistent enrolment data makes it impossible to ascertain the trend; because of this, most enrolment-based indicators have little significance. Even though the dropout rate at the primary and upper primary levels of education has declined in the recent past, the same at the secondary and higher secondary level of education is alarmingly very high.

In addition, retention rates at all levels of education indicate that a good number of students who entered Grade I do not reach Grade V and subsequent higher grades, and the percentage of such children not reaching these grades is very high. For example, only 44 percent of the total enrolment in Grade I could reach Grade XII, thus causing inefficiency in the system to a great extent. Without improving the efficiency of the education system, the goal of universal school education in India is not likely to be realized shortly, even though most of the facility indicators, including teachers, have improved in the recent past. 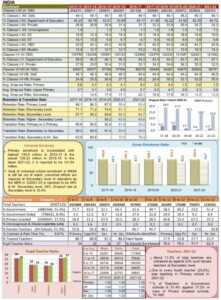 The All India School Education Survey, which the apex national institutions were conducting, such as the NCERT, is the only source of information on the availability of schooling facilities in the County and was latest conducted in the year 2008-09 through 8th AISES. In the absence of the newest information, it is unknown whether schooling facilities are equally accessible to the entire rural population, which has become essential given the recent drastic decline in the number of schools. Therefore, revamping AISES is the need of the day. Still, if revamped, the same must confine only to those variables, such as the habitations having access to schooling facilities in rural areas, which are presently not covered under the UDISE+.