On the occasion of International Population day, the United Nations Department of Economic & Social Affairs (UNDESA) released the World Population Prospects 2022 (WPP) which reveals that India will over cross the population of China in 2023.

The Worlds population is predicted to be 9000 million in 2038 and India’s share of 17.85 percent of the world’s population, continues then India would have an approximate 1607 million people which would be 179 million more people than in the year 2023.

It may be recalled that the Report of the Expert Group on Population Projections set up by the Ministry of Health & Family Welfare released in June 2020, projected India’s population to be 13,83,163 thousand people in 2023 which is much below the latest projection of India’s population released by the UNDESA  through WPP which has large implications for India to move towards Sustainable Development Goals (SDG) in general and Goal 4 on Education in particular. The difference between the two estimates is huge and to the tune of 45 million (4.5 Crores). The difference in the total population is also likely to be reflected in the school-going age population which if happens many of the present indicators, mostly enrollment-based indicators would be required to be relocked into.  However, when the 2021 Census figures are available would throw more light on the status of school education in terms of universal enrolment.

The Population predictions by the UNDESA and their implications can be understood more through the following graphs published in the Hindustan Times on 12th July 2022 (Delhi NCER Edition). Readers are advised to give full reference of the material used in any form of use. 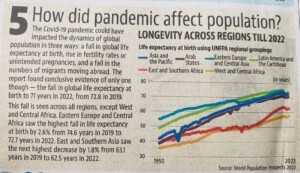 The UNDESA predictions further suggest that the COVID19 pandemic might have affected the global population in three ways but have conclusive evidence only in the case of only one way i.e. fall in global life expectancy at birth to 71 years in 2022 from a high 72.8 in 2019 which is found to be true for across the regions of the World except for the West & Central Africa. East and Southern Asia also experienced the highest decrease which is to the tune of 1.8 percent from 63.1 years in 2019 to 62.5 years in 2022.